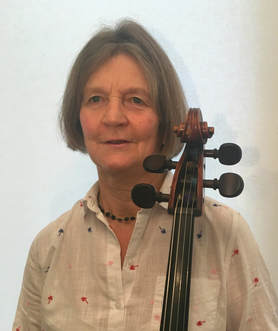 
After graduating from the Royal College of Music Sara Bethge became a member of the City of Birmingham Symphony Orchestra and later of the Orchestra of the Royal Opera House Covent Garden. She also freelanced with the English Chamber Orchestra. When her own children were young, she began to investigate the Suzuki Method and was so impressed with the quality of teaching of her son’s Suzuki Method piano teacher,  that she was inspired to train as a cello teacher herself. Despite many years of following the progress of her pupils from French Folk Song to Faure’s Elegy, she is still captivated by the challenges and rewards of the journey for the pupils and their parents! She is also a Teacher Trainer and has taught in various European countries. She introduced the Suzuki method to Polish cello teachers.