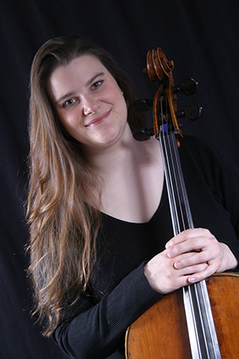 Rosie Biss
In addition to her role of Principal cello of Welsh National Opera, Rosie enjoys a busy and varied career as chamber musician, soloist, guest principal, and teacher.

As recitalist and former member of the Zehetmair quartet and trio, the European Music Project and the Scottish Ensemble, Rosie has played throughout Europe and America's concert halls, broadcast on BBC Radio 3 , Classic FM, WDR 3 and performed at major music festivals including Edinburgh, Aspen, Verbier and Schleswig- Holstein.

Away from the regular classical regime, Rosie has recorded albums with folk musicians Rachel Unthank and Troy Donockley and performed with the German Cabaret show "Ensemble Extravagance!"

Rosie studied at Cambridge University and The Cologne Musikhochschule under Maria Kliegel. Now a keen educator, Rosie teaches cello and chamber music at the Royal Welsh College of Music and Drama, and coaches for the National Children's Orchestra.

Rosie is very excited to teach on her first Suzuki course, having attended her last one as a student over a quarter of a century ago. She comes from good Suzuki stock, her two sisters and husband all professional violinists who also started with the Suzuki method!