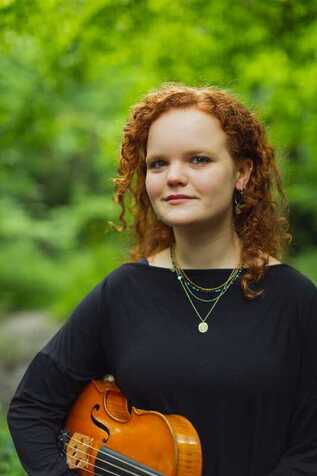 Ellie studies Viola and at the Guildhall School of Music and Drama with Rachel Roberts. Previously she was at the Royal Academy of Music with Martin Outram (of the Maggini Quartet) and Nicolette Moonen.  Her recent orchestral experience includes principal viola of the Royal Academy Opera orchestra and of the Baroque Orchestra in the RAM Kohn Bach Cantata series in projects on modern and baroque instruments.  She was also previously principal viola of the Junior Guildhall Symphony and String orchestras as well as a String leader in the National Youth Orchestra of Great Britain.  She has enjoyed playing in masterclasses with Lawrence Power, Hartmut Rohde, Mate Szucs and Tatjana Mazurenko.
​Ellie is a Member of the European Suzuki Association and British Suzuki Institute – training in Edinburgh with Mysie Ferguson. She teaches and coaches at the Chiltern Music Academy in High Wycombe, provides individual and group tuition as part of the Suzuki in Schools Initiative in Hackney as well as teaching at Cellofest International Suzuki course and the Edinburgh Suzuki Workshop. Ellie is keen to inspire her pupils to learn both as much as they can and to love making music- in the same way she has been inspired by so many musicians.