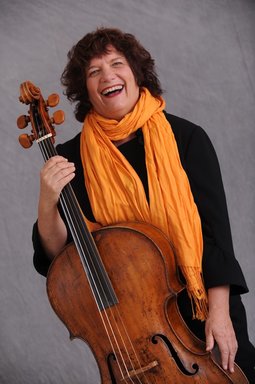 Angela trained to become a Suzuki cello teacher on the very first training course for cello in the 1980s and is a level 5 teacher and a teacher trainer. She has always included teaching amongst her wide range of activities as a performer in the ensemble Red Priest, as a continuo player in several leading baroque orchestras in London and as a teacher of the Alexander Technique. She founded an independent Suzuki teacher training course in 2013 which is now in its fourth year.

Angela has made two solo recordings, ‘Baroque Cello Illuminations’ and The Bach Cello Suites and has taken part in over 200 others including some by the Rolling Stones, Elton John and Eminem. She has founded two groups of her own (London Baroque Soloists and the Revolutionary Drawing Room) and has contributed articles to journals such as Early Music Today and Arco. She has published editions of the Donizetti String Quartets and her book ‘Play Baroque’ has been published by Stainer and Bell. Several pieces from this have been chosen by the ABRSM as exam material.